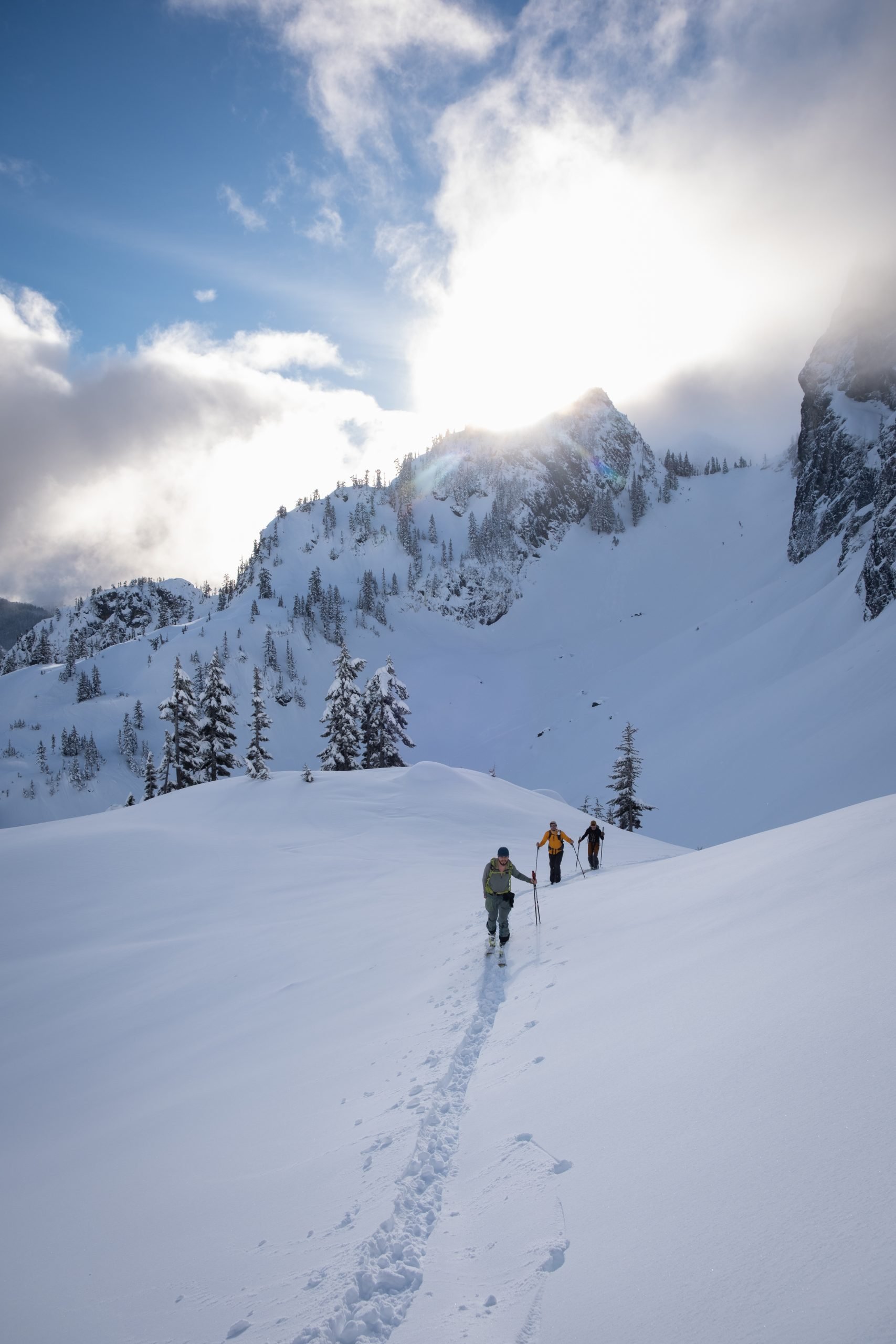 There are SO many ways to do a Chair Peak circumnavigation, so I’ll just add one more to the list. We were getting 5-6 inches of new snow with N/NW flow, which would be enough to rejuvenate the tracked out Chair Peak environs. A few days prior I had seen the East Couloir on Kaleetan Peak and wanted to go back. I figured there were other ‘goodies’ to add to make it a more rounded tour, so I thought of linking up Kaleetan with the Cupcake, Roosevelt, and then heading back to Snow Lake Divide…kind of just seeing where the day would take us. I rallied Dan, Michael, and Todd to join me for a day with a lot of horizontal walking and some vertical.

NWAC was calling for ‘Considerable’ ATL, with Moderate-Moderate NTL-BTL. This confused me a bit, since almost all of the Chair Peak environs are really NTL; having been in the zone the last few days, I felt the snowpack had bonded really well to the rain crust beneath and that if the storm came in with low wind and delivered at the forecasted SWE, it could be an appropriate day for eastern (wind loaded) aspects.

The ‘goal’ for the day was to:

It was a plan that was predicated on getting good observations that wind slabs weren’t reactive on the ridgelines that we’d be traveling under. The biggest concern for us was the East Couloir of Kaleetan, which typically has a large overhanging cornice and a lot of ‘hangfire’.

We climbed up Big Trees towards Bryant’s Couloir and were getting good signs that the snow had come in as forecast. BTL and NTL we weren’t seeing any signs of wind affect. We continued to monitor and do quick hand shears, but weren’t getting any red flags.

It was such a pretty morning, with moody clouds and sun poking through. The day was supposed to get clearer and clearer, but the clouds were building high and providing lots of shade. LOVE IT! We had good visibility but lots of shaded aspects. It was keeping the snow protected, both from glopping (with the new snow) and from crusting (for later in the week). SCORE!

The run off the backside of Bryant’s was pretty good, even though it was facing the windward direction. We could feel the sun crust and remnants of avy debris below, as it’s a S facing aspect that gets baked and regularly wet slides during sunny days. We had fast powder down to Melakwa Lake. It was a good sign for the rest of the day!

We cut trail up the Melakwa Valley towards Melakwa Pass, where we passed underneath so many interesting lines! The one we had our eyes on for the day was the East Couloir of Kaleetan. Our plan was to skin to the bottom of the line then boot up, if we felt conditions were appropriate. Thankfully, the high clouds were keeping warming at bay and the cornice wasn’t too large yet. We gave it a green light to boot up and began the wallowfest of swimming through hip deep powder.

In the couloir we found 3-4 inches of sluffy storm slab on top of cohesive snow. The top was easily sloughing off as we booted up, but wasn’t too concerning to turn around. We stopped just 10′ shy of the true top of the line, as rocks and a potential moat concerned us about the potential for a ‘start zone’, if the line were to slide. No matter! We had plenty of goods beneath us! As the photographer I “had” to go first to get pictures.

We had flat light during our couloir run but great turns on the apron below. We continued up towards Melakwa Pass then bumped up to the Cupcake Couloir, always a good time.

After the Cupcake Couloir, we had skin tracks the rest of the day, as we were in the crowded environs of the east side of Chair Peak. SCORE! We skinned up to the North Summit of Roosevelt (where the Holy Diver is) and picked our way down the NE/E Ridge. There were a series of ramps we were able to follow that ‘went’ to the saddle above Gem Lake. I got cliffed out at one point and had to transition quickly to bump back up, but the other guys found their line. Yay me…more skinning. It was fun to ski without any beta and needle our way through a haystack of does it go? The snow wasn’t the best but it was a fun way to add some spice to the day.

We skied down towards the true east ridge of Roosevelt and then down to Snow Lake. We had more in the tank and decided to add on the SW Face of Avalanche Mountain for good measure. From across the lake we could see the open clearing from the summit had tracks on it, but looked to still have fresh snow to farm. Plus, if there were tracks there’d be a skin track!

I bonked a bit on the climb up but ate some food and was back to being me again. We tagged the summit of Avalanche in the late afternoon and skied down the SW Face, which yielded some fun turns. After a quick snack we transitioned, headed up Snow Lake Divide, and skied out.

Overall, a great day with some luck, exploration, and mixed bag of good snow. My cup was filled.