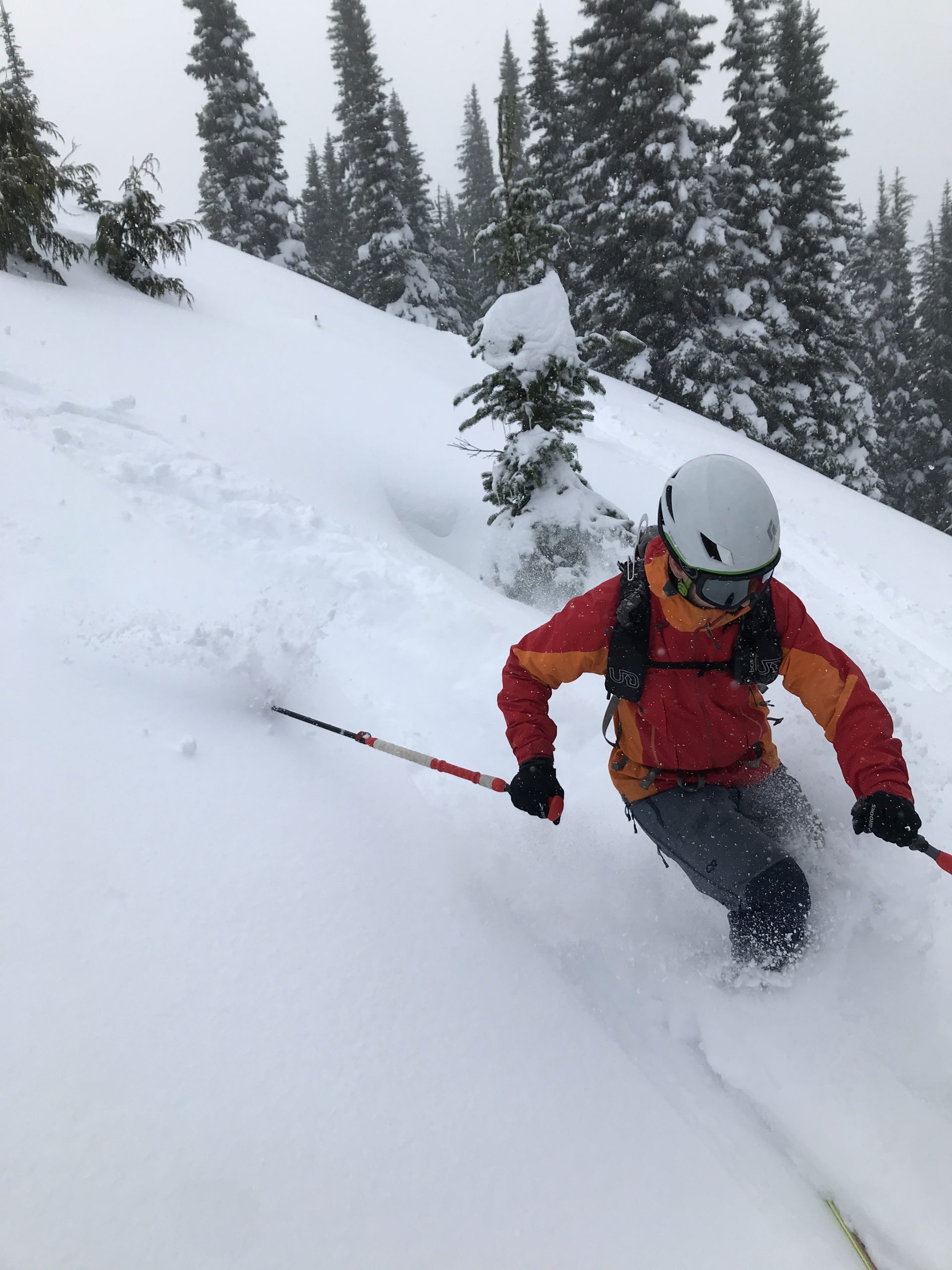 It was early season here in the Cascades and excitement was high after a series of storms dumped FEET of snow in the Cascades. Still, coverage was spotty in many places, especially lower elevations like Snoqualmie and Stevens passes. But I still wanted to get out and explore! Really, the goal was to explore the snowpack and begin to develop an understanding of how the layers were beginning to build for the season.

Dan and I began to hatch up a plan for Sunday…though what and where was still undecided. Dan’s wife gave us the idea of Bullion Basin, tucked to the side of Crystal Mountain ski resort near Mt. Rainier (thanks M!!). With a base elevation of 4,000′, it was higher up than Snoqualmie, just about the same as Stevens. But temperatures appeared colder here than at Stevens.

I threw out a message to Michael, a mutual friend of Dan and I, and he brought along his co-worker Tessa, an experienced skier and another mutual friend of Dan. Together, we agreed to venture into Bullion Basin for an exploratory, early-season day, with ABSOLUTELY NO EXPECTATIONS of any good skiing. To be honest, I thought it would be “hairy”, meaning trees and bushes still sticking out of the ground.

We met up at Dan’s place in Seattle at 6:30 AM and began the drive towards Crystal. The resort was still closed to the public, so traffic was not bad at all; we made it to the parking lot in under 2 hours; when Crystal is open, there can be a line of cars that can keep you waiting for HOURS!

We certainly were not the only ones with the idea of Bullion Basin, as the couple dozen cars in the parking lot proved to us. That was fine! Plenty of terrain to share! The temperature was just below freezing, around 31 F, at the parking lot elevation of 4,000′. We slapped on skins at the car and began our uptrack! A morning glow illuminated the way, the sun just poking out in between the clouds.

Almost immediately, my reaction was of surprise…at the coverage! The snow was deep…it didn’t feel like November! Nowhere did we see rocks protruding, no sharks in sight!

We followed the Bullion Basin trail as it switched back up towards Bullion Basin. The low angle trail made for easy skinning, and there was already a skin track put in by a group ahead of us.

Overall, the tour heads up towards the flat marsh at the base of Bullion Peak, and from there affords endless options for tours…up to Bullion Peak, north towards Platinum Peak, East Peak, or laps in trees and glades. Your pick!

We chose to head up towards Bullion Peak, stopping at a shoulder along the ridgeline for an initial lap to assess stability. We could sense a top layer of 6-8″ and wanted to see how it reacted.

We stopped just at the start of the ridgeline ascent to Bullion Peak for a quick lap down along the skin track and then back up to the “base.” I took the first few turns, claiming I wanted to take some pictures…which was true, but also FRESH TURNS!

The snow was sooooo good…relatively light and impressively deep, with NO SHARKS! It didn’t feel like early-season conditions, it felt like FULL-ON season conditions. We transitioned and began to head back up for another run.

On our second lap we headed all the way up to Bullion Peak, repeating our skin track and following the ridgeline safely up to the peak. From there, we skied down the ridgeline a bit to an open glade which led us back down to the “base” spot. Again, the skiing was GOOOOD, and even a little sun!

For our third lap, we eyed some turns above us to the north off of the slopes of Platinum Peak. We zig-zagged up a skin track cut before us…why do work when someone else has done it for you? We dropped into an open glade, again, yielding fresh, soft powder. YUM!

For our fourth lap, we again headed back up to Bullion Peak, this time skiing the north bowl directly beneath the peak. We were impressed by the stability of the snowpack, quite coherent and well-bonded. The bowl had been tracked out by skiers before us, but yet again the skiing was good! Earlier in the day we were hesitant to ski the more open slopes beneath Bullion, wanting to wait and see what other skiers reported first.

After our fourth lap we stopped at the base area to do some avalanche search-and-rescue practice, getting out our shovel and probes and running through some different searching scenarios.