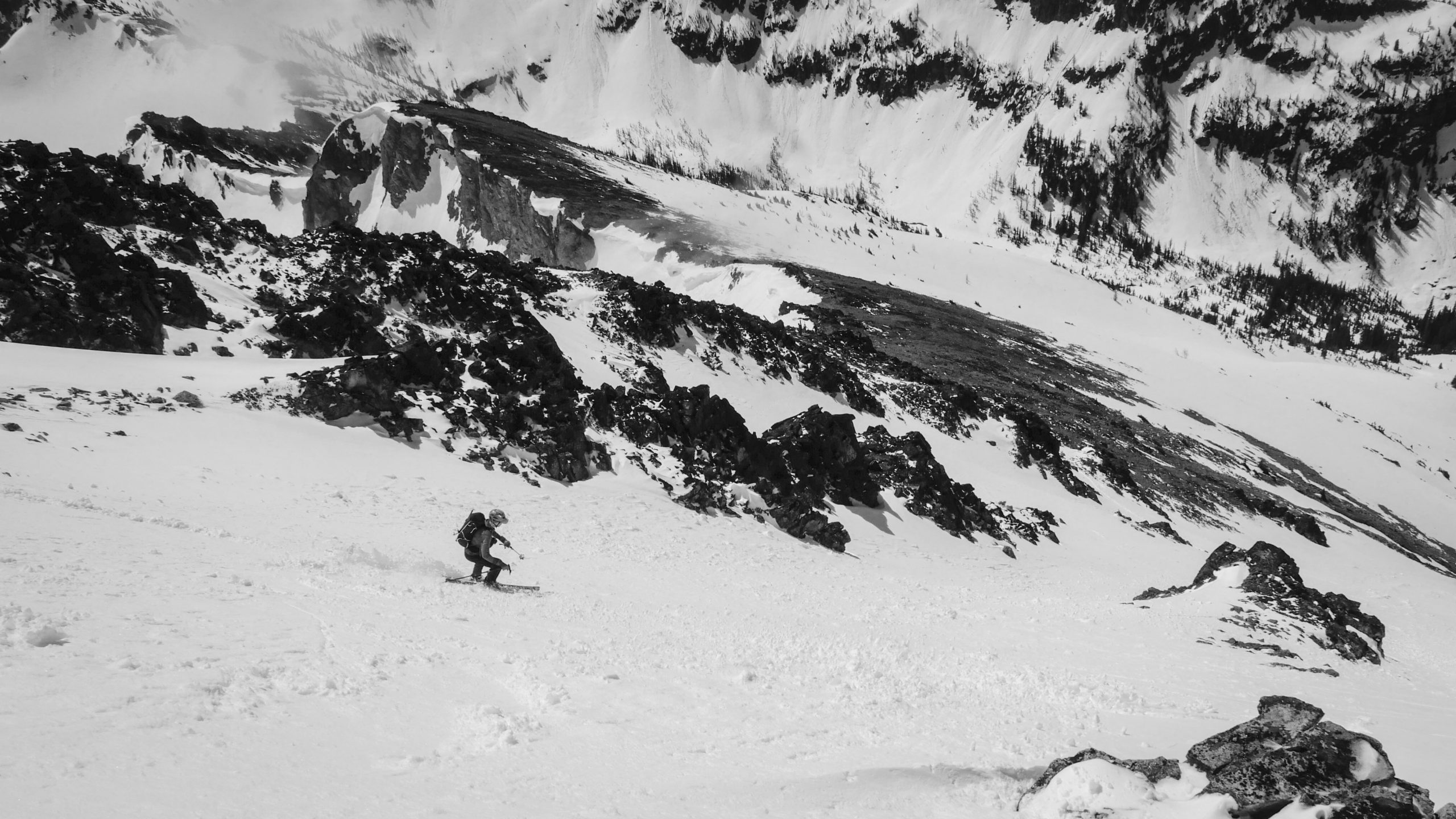 Memorial Day weekend continued in Washington Pass! Dan, Michael, and I remained in the Washington Pass area after a ski of Silver Star Mountain the day before; next up…Black Peak.

High pressure was in the forecast for Saturday, with clear skies and warm temperatures predicted. Looking at the route, we were intrigued by the verticality of Black Peak: skiing down the southern face to Woody Creek gave over 3,000′ of skiing?!?!

The tour out to Black Peak was “bumpy”: up and down from lake basins to ridgelines, with multiple transition points along the way. We would skin up to Heather Pass from Rainy Pass, ski traverse over to Lewis Lake, skin up from Lewis Lake to Wing Lake, skin from Wing Lake to the col SW of the summit pyramid, and then boot up the summit pyramid to the summit ridge, where a spicy class 4 scramble awaited.

Section 1: Skin up to Heather Pass

From Rainy Pass, we followed the summer trail towards Lake Ann. We switched back occasionally through the trees before reaching a bowl to the N of the outlet of Lake Ann, where we climbed up towards the lake outlet. We stayed low in the lake basin, wanting to avoid side-hilling if possible. The lake was still frozen over, and we began to traverse up towards Heather Pass just above the northern slopes of Lake Ann. The morning crust was firm, so we threw on our ski crampons and got out our whippets.

From Heather Pass, we clicked into our skis for a CRUSTY and choppy ski traverse over to Lewis Lake. We traversed across a few large avy paths, which were full of freeze-thaw debris that made for some awful skiing. We were able to stay high enough to skier’s left to ski all the way down to Lewis Lake, where we transitioned for the skin up to Wing Lake.

Section 3: Skin up to Wing Lake

From Lewis Lake, we followed the gentle contours up to Wing Lake. The snow conditions were perfect for skinning: just a small layer of softer snow on top of hardpack, leaving great grip and little if any penetration into the snowpack. Not much more to report.

Section 4: Skin up to col SW of Black Peak

From Wing Lake, we skinned up to a col just SW of Black Peak. By this time in the day, the snowpack had begun to warm and we could see roller balls beginning to shed off of steeper, overhead slopes. The traverse to the col passes through a bowl, which we could see was corniced. We tried to move through this region as fast as we could, understanding that wet slides were becoming an increasing concern with every passing minute.

We transitioned to boots, crampons, and ice axes just below the ridgeline, taking pause in a spot in between cornices. From this point on, we kept our skis on our backs all the way to the summit.

The ridge itself was severely scoured, mostly bare rock with occasional patches of snow. I removed my aluminium crampons for the brief traverse over to a snow ramp on the W side of the ridge, which gave passage all the way N towards the summit block. Booting conditions were PERFECT; the ridgeline shaded the snow and produced a firm, solid surface which was excellent for cramponing. We kept one pole out and got out our ice axes and proceeded to boot all the way up towards the summit block.

At the summit block, we dropped our packs and continued up towards the summit ridge just with ice axes and crampons. There was a brief mixed rock and ice scramble that we had to navigate to reach the summit ridge, but we felt comfortable doing so without rope or protection. Upon reaching the summit ridge, we found the final scramble to the true summit beyond our comfort level: it involved Class 4 scrambling on dry rock with thousands of feet of exposure. Without ropes, harnesses, or any means of protection, and in ski boots, we all felt uncomfortable with the potential risk and hazard. Additionally, we wanted to extend our tour to Last Chance Pass, and felt that the summit scramble would delay that extension later into the day, which would mean a more hazardous and mushy snowpack.

Overall, we were very happy with the progress we had made up towards the summit. The real goal of the day was the ski down to Woody Creek…and we were READY!

Section 6: Ski down to Woody Creek

CORN HARVEST! Conditions were unbelievably good down to Woody Creek. From the summit block, we skied down through a couloir, one at a time, until we reached the wide open south face of Black Peak.

Mid-way through our ski of the south face we had a decision to make:

Looking over at Last Chance Pass, our concern was snow stability. The solar effect throughout the morning had been intense, as evidenced by the shedding on our ascent from Wing Lake up to Black Peak. Thinking it through, we decided to continue on to Last Chance Pass because:

a. Returning to Wing Lake would not be much safer or faster. We still had concerns about the cornices and shedding that we had witnessed on the bowl above Wing Lake, and returning back to it in the early afternoon would only be worse

b. Looking over at Last Chance Pass, we felt the aspect was more shaded from solar effect than returning to Wing Lake would be.

c. We felt comfortable with our speed and ability to extend to Last Chance Pass, and it was an extension we were interested in.

Once we reached Woody Creek, we transitioned back to our skins and began to follow the creek up towards Last Chance Pass. There appeared two ways to reach Last Chance Pass:
1. Climbing steeply then traversing OVER a set of cliff bands

2. Following Woody Creek until directly beneath Last Chance Pass, then switching back up a steep snow ramp to the pass.

From a distance, option 1 actually appeared more favorable…it was hard to tell the true angle of option 2 from across the creek when we had stopped mid-way through our ski of the south face of Black Peak. As we got closer, however, we could tell that option 2 was clearly a safer option, as it did not have the underneath hazard of cliff bands.

The snow was now wet, heavy, and sloppy, and our skins were SOAKING WET. We stopped at a snow bridge across Woody Creek to fill up our water bottles and continued on up towards Last Chance Pass.

The heat from the reflection of sun off the snow was WICKED, with nowhere to hide. We switched back and forth up to Last Chance Pass, feeling like we were getting cooked along the way. The snow ramp was steep, and at times we had to be delicate with our kick turns.

Looking up, we thought we could see Last Chance Pass from the Woody Creek drainage…we were wrong. Turns out it was a saddle a few hundred yards from the true pass. Upon reaching the saddle, we continued to traverse over to the pass for a snack, water, and skin-drying break.

We weren’t able to hold our elevation well along the 6,200′, dodging cliff bands and crossing drainages and avalanche paths.

Once we bottomed out above the Maple Creek drainage, we slapped on our skins and headed up towards Maple Creek Pass, above Lake Ann. The skin was low-angle, tame, and VERY HOT, with the afternoon sun now beating down on us.

Section 10: Ski back to Rainy Pass

From Maple Creek Pass, we followed skin tracks back along the way we had came towards Rainy Pass. We were DETERMINED to not transition again, and minus a few yards of having to pole and push our way through sloppy, mushy snow, we were successful.