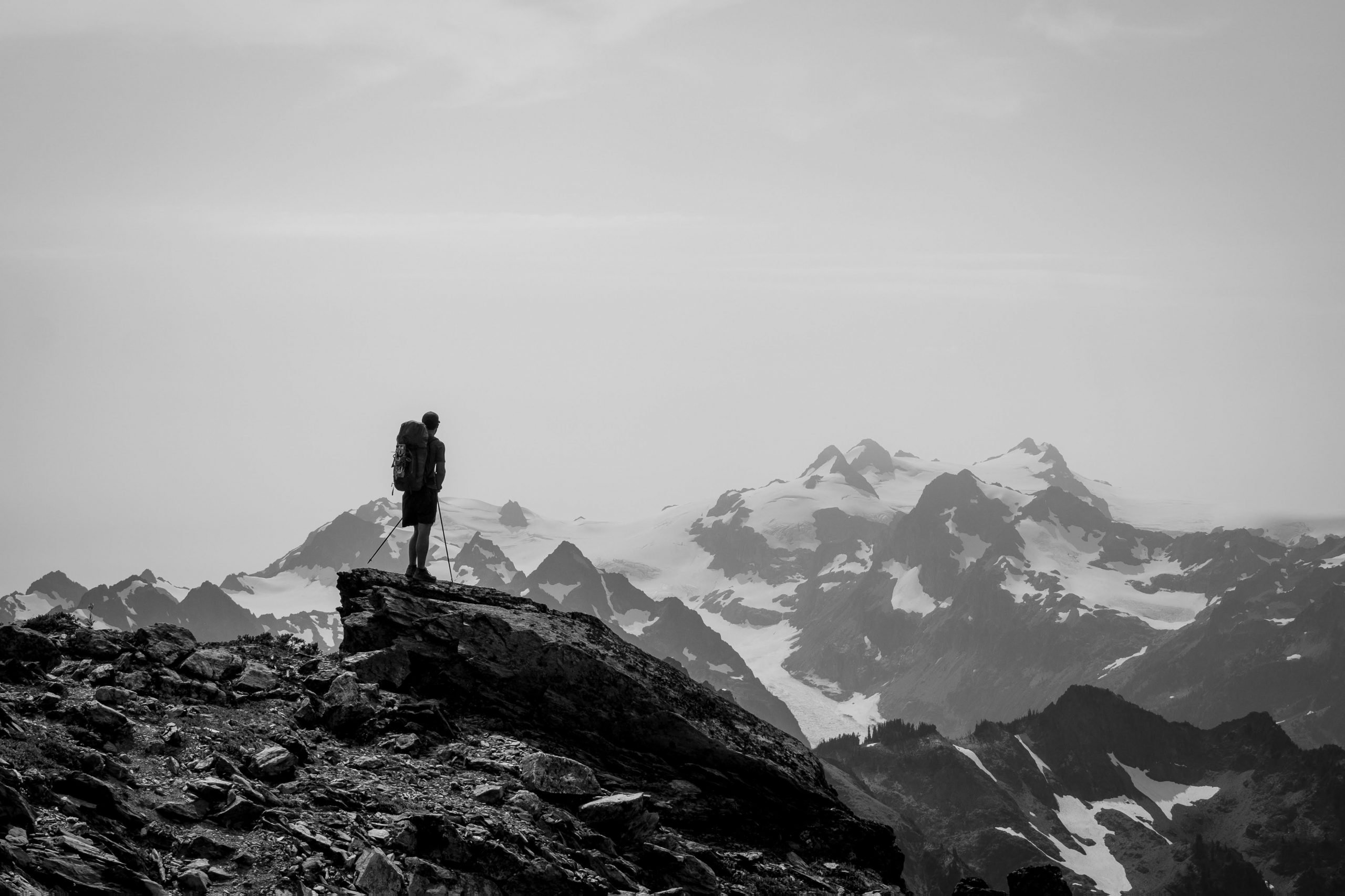 I first was drawn to the Bailey Range by reading of Jason Hummel’s Tour of the Gods, an epic ski traverse that explored some of the deepest reaches of Olympic National Park. The range stretches north to south alongside the striking Mt. Olympus massif, which I had run in a day a few years earlier. I knew I had to return, and it was just a matter of time and weather to align.

Kyle and I had been planning for a week-long high-route for the summer; initially, we had been intending to head up to the Pickets and Chiliwack group in North Cascades. But when an unlikely rain front in early August, we pivoted (a bit last minute) to the Bailey Range Traverse. We both had the same idea of starting from Sol Duc Trailhead, starting with the Northern Baileys, then the Southern Baileys, and finally wrapping around through the Mt. Olympus massif, tagging Mt. Olympus, and then climbing up and over High Divide back to make a big ol’ loop. It was our ‘Plan B’ but hardly a true concession of a trip.

Thankfully, Olympic National Park has changed their permitting system such that you can reserve permits over the phone (unlike North Cascades National Park, which still requires you to go to Marblemount in person…so out-of-date!). Rio made the call on Friday while Kyle, Nick, and I were working and got us permits for the trip (thanks Rio!). Our itinerary would be approximately:

For the Bailey Range Traverse, you need to actually talk to the rangers so that they can assess your ‘readiness’. ONP requires bear canisters, which made us groan, but rules are rules.

In terms of gear for the trip, we brought:

We took the Edmonds Ferry early on Saturday morning to Kingston and drove to the Sol Duc Trailhead. Even by 10 AM on a Saturday the parking lot was nearly full, but we managed to find a spot.

We started hiking up to High Divide from Sol Duc Trailhead around 10 AM; there was a slight mist that kept it humid beneath the tree cover. It tapered off by the time we made it up to Heart Lake, where we started to get views with a high cloud base. We could see Olympus poking through the trees; it would be on center stage for the next few days as we made our way through the Bailey Range.

From High Divide we turned left and started to head along the ridgeline towards the ‘Catwalk’ beneath Mt. Carrie. The ‘Catwalk’ is more of a scrambl-y section than a trail, but it wasn’t anything more than Class 2/3. A little jungly, but nothing horrible.

Once past Cat Peak, the trail became fainter and fainter as we began to sidehill more and more. Still very well defined and easy to follow, just required more ankle flexion than normal. We crossed over numerous avalanche chutes of garbage choss and dirt underneath Mt. Carrie on our way towards camp.

Still…the terrain was incredible. The mood of the soft light with the high cloud base and long glacial river valleys was lovely.

We made it to 11 Bull Basin by late afternoon; there were a series of heather benches positioned amongst flowing streams that made for a perfect campsite. Plenty of water, but definitely a few bears lurking about.

We watched the sun set over the Hoh River valley, with alpenglow fading over the Olympus massif. Pink and orange clouds, alpenglow….feelings of summer.

Day 2 we opted to take a bit of an alternate route:

From camp, we followed the now faint side-hill trail through low brush along the hillsides. The train became fainter and fainter as we got further from High Divide, but was definitely still noticeable. Still a decent amount of brush-bashing, though. Once we reached the western sloping ridgeline extending from the col above Stephen Lake, we began to hike up through heather meadows towards the col. Actually, we tried to follow the ridge proper at first, but gave up on that brushy attempt and backtracked to the heather…lol.

As soon as we made it to the col above Stephen Lake, we knew we would be glad with our decision. This terrain was amazing. Post-glacially polished slabs, snow slopes, and a beautiful turquoise lake…YES!

Ferry Basin was cruiser travel; gravel bars and glacial lakes made for a perfect mid-day swim spot. We escaped the peak heat of the day in the lower Ferry Lakes. The water temperature was just enough to ‘wake you up’ but not enough for that painful near heart attack that some glacial lakes provide.

We wanted to push past Lone Tree Pass, one because we wanted to shorten our next day across Queets Basin which would have rough terrain, but also because we didn’t have water and there wasn’t any at Lone Tree Pass. We anticipated finding water in one of the basins just to the south.

Sure enough, after just a bit more ridge walking we found a lovely bench nestled amongst snowfields that gave us running water. PERFECT!

Day 3 would take us through the entire Southern Bailey Range, across the Humes Glacier, and to a small camp perched above the Hoh Glacier called ‘Camp Pan.’ None of us knew anything about it, but a mutual friend of Kyle and I had HIGHLY recommended this camp. So…why not?!

Out of camp we laced up crampons and continued across snowfields along the ridge of the Southern Baileys. Overall, terrain was quick and easy all the way to Bear Pass Peak.

From Bear Pass we descended down into Queets Basin, an amazing vast expanse of post-glacial terrain. Braided rivers every-which-way, a few bears, and views for DAYS…what more could you ask for?!

We knew that the most annoying part of the day was just ahead of us: climbing out of Queets Basin and heading towards the toe of the Humes Glacier. The ‘route’ tries to stay high and traverse through brush and across some steep drainages, where it dumps you basically right at the terminus of the glacier. This involved SIGNIFICANT fuckery, though. A few thoughts:

The bushwhack was HOT and took us almost 2 hours. But finally, we were at the terminus of the Humes Glacier, with plenty of bare glacial ice out to look out. SO COOL!

We roped up and strapped on crampons for the Humes Glacier. It was so cool to hear the crunch of pure, bare glacial ice beneath our feet.

The Humes was a nice, easy, low-angle glacier walk. All of the crevasses were easy to spot; that said, there were MANY of them. We headed up towards Blizzard Pass, where we’d pass through to get to Camp Pan, our perch for the night above the Hoh Glacier.

From Blizzard Pass, we descended down snow slopes in front of the Olympus massif. My jaw dropped.

We could not believe how amazing Camp Pan was. There were at least 4 bivy sites, with running water just a short walk away. And the views…WOW! We had it all to ourselves and it felt truly special.

We took in the lightshow of sunset and went to sleep, full of smiles. Kyle woke up to take a few star photos late in the night, but I chose to sleep soundly.

Day 4 would take us across the Hoh Glacier, down to the Blue Glacier, up to the summit of Mt. Olympus, then down the trail towards the Hoh River. From Camp Pan, we found a series of ledges that led us down to the Hoh Glacier, which was surprisingly easy for what it looked like. From camp it appeared a sheer drop off a cliff, but with the ledge system there was no scrambling involved.

We traversed across the Hoh Glacier to Glacier Pass, weaving in and out of crevasse fields. We had thought, for a second, about trying to traverse up to the Middle Peak of Olympus, but we had little beta and thought it might involve loose rock and rappelling, so we opted for the more ‘sure’ option of Glacier Pass.

From Glacier Pass we could see climbers headed up the Snow Dome on their way up to Olympus. We would descend to the Blue Glacier, where we would meet up with the traditional climber’s route up Olympus.

We dropped some of our stuff where the Blue Glacier met rock slabs up towards Snow Dome. There was running water, we filled up our bottles, and headed up. Although I had already summitted Olympus before, doing it as part of this bigger traverse felt purely aesthetic and necessary. I was tired and low on food, but my stoke refueled me on my way up.

Nick and I got into a groove on the highway like bootpack atop Snow Dome. The Fourth of July Pass route was out, so we traversed over to Crystal Pass and then wound our way around towards the summit block. It felt long and roundabout, but before long we were at the summit block with the final pitches to the top.

Nick bravely led the 5.7 pitch solo and rigged a handline for the rest of us to use; I am not one for solo 5th class scrambling, so THANKS NICK!

WOO! We were on the summit by 1 PM, and Rio pulled out some baked goodies he had been keeping for all of us. I nearly cried from joy. We doubled up our 30m ropes and rappelled down the other 5.4 side, then down to the route again.

When we met back with our packs, Nick found that the spot in the rocks he had left his stuff had now turned to a RIVER! OH NO! His sleeping bag was SOAKED. He took everything out and began to dry it in the intense afternoon sun. He got a few extra minutes to dry stuff out once I realized I had left my crampons up higher on the route. Dang it. I climbed halfway back up before I ran into a group that had picked them up. WOOHOO!

We saw afternoon clouds forming in the distance, so as soon as I had my crampons we suited back up and headed out across the Blue Glacier towards the trail down towards Glacier Meadows. From the lateral moraine I took in one last view of the incredible scenery. BYE BYE!

We opted to camp just short of the Olympus Guard Station, as the day was getting late and we found a nice spot near the Hoh River (we suspected it to be around 1.5 miles before Lewis Meadows Camp).

Day 5 took us back up to High Divide past Bogachiel Peak and then to the car. The 4,000′ climb went quickly on trail, but all we could think about was FOOD. We talked about our favorite meals, meals that reminded us of home, etc. Nick had mentioned a BBQ burrito place in Port Angeles, which made us race even faster towards the cars. LOL.

On our way to Port Angeles we stopped by Lake Serene and jumped in the lake, hot, sweaty, and smelly. It was just what I needed. That…and the MASSIVE BBQ burrito at Little Devil’s Lunchbox in Port Angeles. SO GOOD!