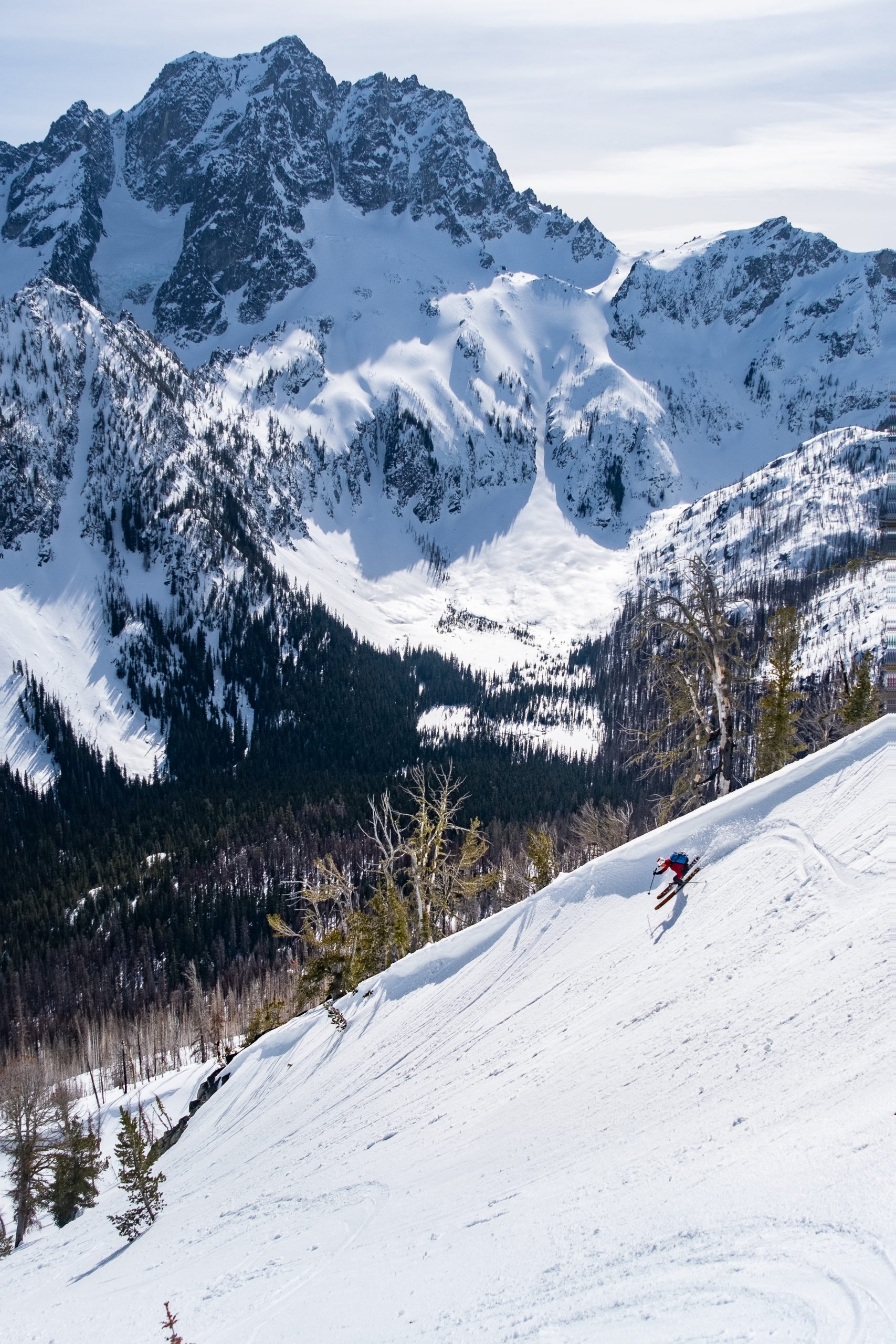 Spring was in the air, calling us to the Stuart Range! With sunshine and warm temperatures, Kyle, Will, Anthony, Liz and I ventured out to the Enchantments, in exploration of Axis Peak. The focus for Kyle and I was pictures…Axis Peak is properly named, giving a perfect orientation for views of Stuart, Eightmile, and the expanse all around.

We headed up the road from Icicle Creek road just as the sun began to rise. The road was melted out in a few spots, but for the most part it still went on skis. Not for much longer…

On the way up the road we got some sneaky views of the Cannon Couloir off Cannon Mountain, calling at me for a future adventure.

The road went by quickly, and we took a turn up towards the Eightmile drainage. Spring refrozen snow makes for quick skinning in the mornings! Anthony and Liz had headed up before us, and were awaiting our arrival just before Eightmile Lake. There was tons of avalanche debris in the Eightmile drainage from a widespread avalanche cycle in February 2021, when the persistent weak layer slid and caused massive D3-D4 avalanches. Crazy…

The day was warm and beautiful, and as we neared the lakeshore of Lake Eightmile we got an amazing view of Axis Peak…we had to stop for some pictures.

We decided to head up to Axis Peak, rather than Eightmile (which was our original plan), and skinned up to the col on the west side of the peak. We booted the final 400′ or so and then took the ridge to the summit.

At the summit the wind was dead and the sun was out…it was time to take the boots off and LOUNGE! I rarely take so much time for breaks on trips, but this time it felt really good to slow down and just relax. Stuart was just too magnificent not to stare at for a while.

We took 2 runs off the south face of Axis, which had turned to sort-of-kind-of corn but made for really good skiing! We found some cool features and gullies to ski down through, as well as a really nice burn zone.

We opted to exit via Stuart Lake and Mountaineer Creek, rather than returning north to Eightmile Creek and the way we had entered. The trees at the start of Stuart Lake were tight but opened up once we reached a meadow just a 0.5 mile or so down from the lake. We threw on skins for a short stint but then were able to ski all the way out to the road once we reached the downhill portion above Mountaineer Creek where the Stuart Lake and Colchuck Lake meet up. The coverage was impressive and the normal “death luge” wasn’t even that bad!