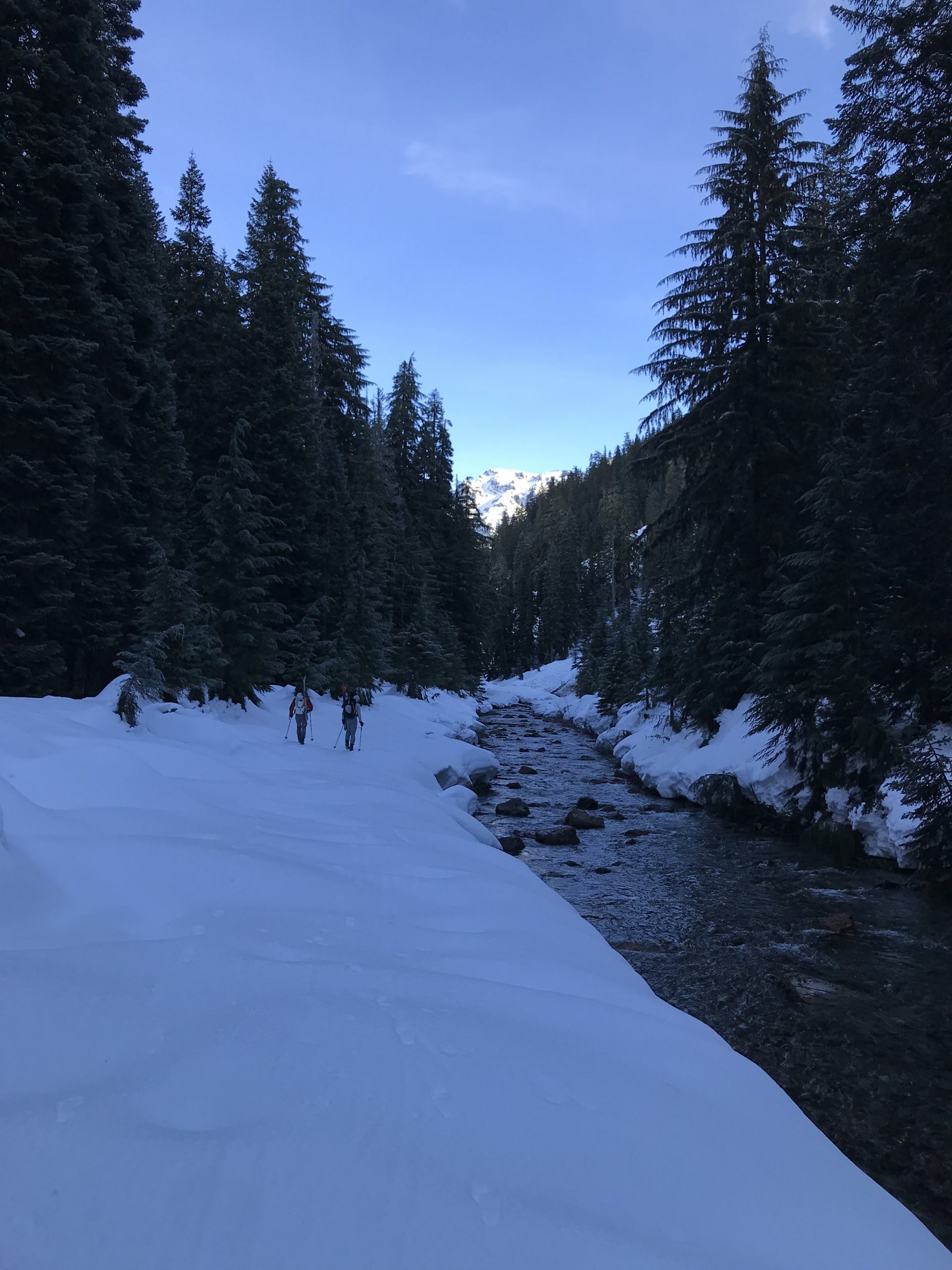 Gold Creek is a gatekeeper: it keeps many a skier away from large objectives like Alaska Mountain, Chikamin Peak, and Alta Mountain, simply because of how treacherous a slog in and out it is. Miles and miles of valley skinning is never tempting, even in the best of skinning conditions.

With the June-uary weather we were experiencing, south faces were the best option, and after much back and forth, Will, Steve, and I convinced ourselves on making the trek in Gold Creek to ski the South Face of Alaska Mountain. Well…more like I convinced Steve and then Steve and I convinced Will…lol. We knew it would involve shenanigans, but then again…don’t many great mountain adventures?

We got a leisurely start to the day, reaching the Gold Creek Sno Park around 730, with just enough light not to need headlamps. A strong inversion was dominant over Washington, so the temperature at the car was a chilly 22 F, whereas temperatures at the upper elevations of Alpental (around 5k’) were closer to 40 degrees! We knew that the day would become toasty as soon as we began to climb up above the cloud layer and out of the river basin…it was just a matter of how long that would take.

It would be 6 miles along Gold Creek to the base of Alaska Mountain; we knew the trail would become messy once we got past the first few miles. What we didn’t anticipate was that the inversion was so strong that the snow was more like ice, and that booting/walking would be much more efficient than skinning?! Within 2 miles we took off our skis and began to walk along the creek…it was quite an odd feeling to be covering so much ground and mileage with skis on our BACKS in January!?!?

We ended up crossing Gold Creek a few miles into the day when we found a large log that made for a good bridge. If we had stayed on the east side of the creek we would have traversed HUGE avalanche debris underneath Alta Mountain…some debris was the size of a large car. Another testament to the destructive power of nature. BOOM!

It took us almost 3 hours to make it to the base of Alaska…geeeeeez. It was going to be a long walk back. At the beginning of the day we had been throwing around ideas of skiing off Huckleberry and exploring multiple lines; now we were just calculating how long a single run on Alaska would take.

As soon as we got a few hundred feet out of the river valley the temperatures began to climb! The inversion was holding strong; within gaining 300′ vertical feet the snow turned from supportable ice to heavy, hot pow. WHAT?!? Crazy…we went from being cold to now baking in the snow.

We headed towards the outlet of Alaska Lake to try and gain the western ridge of Alaska, which we felt would be a more protected ascent route up Alaska, as opposed to climbing the face directly. Skinning up to the ridge got slippy and slidy with the poor snow quality, and we eventually transitioned to booting. We chose to climb up a gully that ended up terminating in a waterfall; Steve found a way out of the gully that involved vertical climbing up alder. Classic… Needless to say I was groaning at times, as I was sketchily climbing in the air, suspended by nothing but alder.

I have to admit…I was worked and tired, and we had barely climbed 3,000′. The day prior traversing Kaleetan-Granite had taken a toll on me clearly. I did none of the work of setting a booter, so big thanks to Will and Steve for that!

After nearly 5 hours, we topped off on Alaska Mountain, in the hot afternoon sun at this point. We took a break on top to admire the peaks around. We knew another group was attempting the south couloir on Chikamin, but we couldn’t see them climbing or skiing on the peak.

As we transitioned to skis (and splitboard for Will), Will’s pole was swept by the wind over the ridge and off into the abyss. Oh well…he’s a splitboarder anyway, he doesn’t need poles right!?!? Lol.

We had taken note of the south face of Alaska from the bottom, as there were many different chutes down the face that we weren’t sure truly ‘went’. We had taken a picture from the bottom so that we could ensure we didn’t get cliffed out from the top.

The top 300′ or so was amazing corn, but the snow quickly turned to mush and began to sluff more than we had liked. We took a ridgeline to avoid a large gully feature that was funneling garbage snow on top of us.

Once we got beneath the main face, the corn returned and the lower angle slopes were quite fun. Looking back, we could see wet slides continuing to trickle down the face.

Now for the zombie march back…thankfully, the crust was still supportable beneath us. Phew!