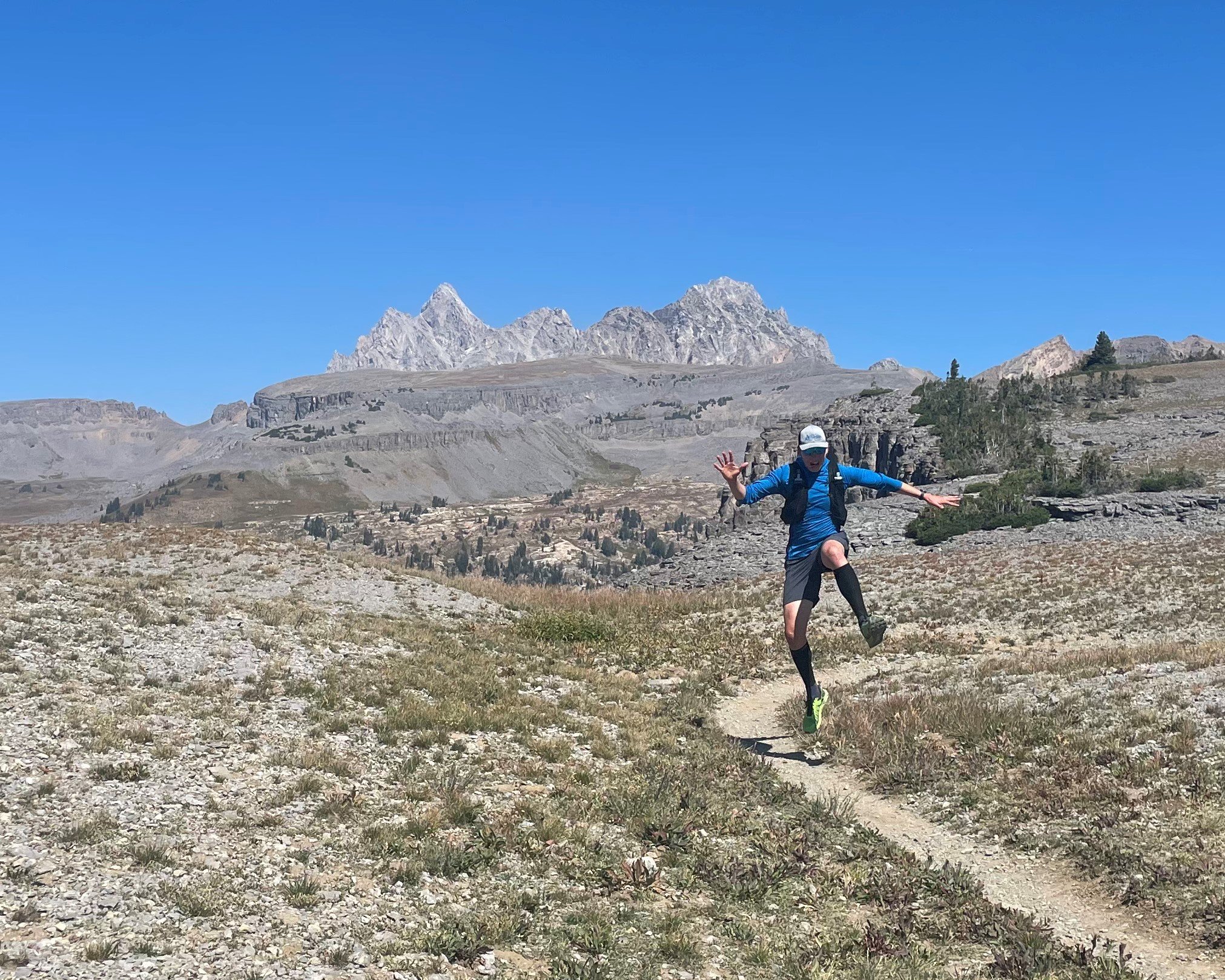 The day before, Isaiah and I had spent 14 hours on the Grand Teton, failing on climbing Exum Ridge. That effort left us feeling tired, a bit sore, and mentally in need of a slow morning. So we slept in until 8 AM and went into Jackson to get some coffee. Quite the alpine start you might say…

Over breakfast we pondered what we wanted to do with the day. We knew that getting out into the mountains would make us feel better about the weekend, but we weren’t sure how big an effort we wanted to do.

I had run the Teton Crest in August of 2020, and knew I wanted to return to Alaska Basin and the Death Canyon shelf area. It was the highlight of the crest trail, in my opinion, and could make for an AMAZING loop from the Death Canyon trailhead. What I was not sure of, though, was how many miles that would entail. In my head, I thought, “It must be like…15 miles or so? That doesn’t sound too bad for a late start.”

After a leisurely coffee, we returned to the car and I pulled out my laptop and mapped out the route I had in my head on Caltopo. OOF…26 miles with 6k’ gain. That was a little more than I wanted. “Let’s just send it”, we both said to one another. The day before on Exum Ridge was definitely a bit of a downer, so we needed a “pick-me-up.”

By this point, it was already 1030 AM and we hadn’t even packed yet. We pulled into a parking spot near the Public Library, I mapped out the route on my laptop using my phone’s WiFi, and we stuffed some food and water into our running vests we had packed in case we had time to go on a run.

We figured it would take us 7-8 hours, which would mean finishing around 6-7 PM with a 11 AM start. An impromptu run, but a much needed day out in the mountains.

Our loop would start out from Death Canyon Trailhead and climb up to Alaska Basin, then take the Teton Crest Trail over to Fox Creek Pass, and descend back down Death Canyon. Overall, it would be 27 miles with 6,000′ of climbing, 4,200′ of which would come right at the start. I think that running along the Death Canyon shelf is one of the most scenic sections of the Teton Crest Trail, and I think that running towards the Grand Teton is much more aesthetic; but by climbing up to Alaska Basin, we would be front-loading all of our vert and have a cruiser descent back to the car. Doing the route in the other direction would mean a long-grueling climb with no end, then a steep descent to end the day.

We estimated that the climb up to Alaska Basin would take us ~3 hours, and we ended up beating that by about 30 minutes, topping out by Static Peak in 2 hours 30 minutes. The weather was PERFECT, with clear skies, no thunderstorms or precipitation forecast, and a slight breeze to keep us cool. As we turned the corner on Static Peak, we let out a WHOOP as we cruised on the expansive trails down towards Alaska Basin. It felt like a trail runner’s dream running along these trails, with views for DAYS.

There were plenty of water sources as we meandered our way through Alaska Basin, and the ponds gave the route an amazing aesthetic. It felt so good to be back in familiar territory, this time in better shape than when I ran the Teton Crest 1.5 months post surgery. I could actually keep up a continuous running pace, as opposed to last time when it was running and hiking intermixed.

My legs began to feel heavy around Mt Meek Pass, which is the start of the Death Canyon Shelf. I ate some gummy bears and guzzled some water and continued on. The shelf itself is relatively flat, with some small ups and downs. It is such a striking feature, with huge drop offs towards Death Canyon and an impressive cliff band above. It definitely is one of the most unique terrain features I have seen in the Mountain West.

Although tired, we were SO glad we opted for the longer run and got to see Alaska Basin and Death Canyon Shelf. As we neared Fox Creek Pass, we saw we had 9.2 miles left. We would cruise downhill for 6 miles, then have a small 300′ climb in the last 2 miles to the car. I tripped and did a front flip on the descent down from Fox Creek Pass, but elegantly somersaulted onto my feet, feeling a bit like a ninja. For once I didn’t scrape my knee or skin my elbow!!

I felt WORKED by the end of the run, much more so than longer runs I have done this summer. My hamstrings felt heavy and tired, likely due to the hike on the Grand Teton the day before. I struggle with self-perception and comparing to others, so by the end of the run I tried to be happy with my effort. We finished in 6 hours 40 minutes, faster than we had initially though it would take us. Overall, a gem of a day in some amazing terrain.