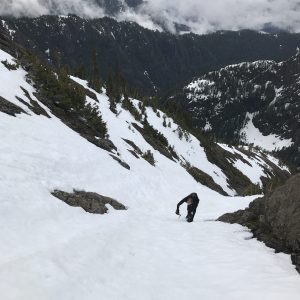 The Brothers is part of the Olympic skyline as seen from Seattle; on a clear day, it stands out high above Puget Sound, demanding attention from those in the city. Tyler and I had been running in the city during the week, locally in our neighborhood, but we were eager to get out into nature for a nice, long day. Weather was clear for Friday, and we both had it off.

The route up to The Brothers in Olympic National Forest is most commonly done in the summer months, when it is almost completely clear of snow, except for occasional patches at upper elevations in shady gullies near the summit ridge. The route begins at Lena Lake Trailhead, off of the Hamma Hamma Road.

Overall, the route is straightforward:

Bright and early! We set out alarms for 2:30 AM to leave Tyler’s apartment in the city. Beep! Beep! Jump up, grab the clothes, coffee, and off we went. Our goal was to hit the trail by 5:30 AM, when first light would just be hitting the Olympics, to maximize our time on trail. We started just past 5:40 AM and off we went.

The first 3 miles up to Lena Lake were nice and easy; we are no speed demons, just looking to have some fun.

We took a quick break overlooking Lena Lake to grab some food and water; on trail runs together, Tyler and I try to stick to the methodology of:

We continued running past Lena Lake, until we got to the inlet, which was full with spring snow melt and required a short wade across.

The water was COLD, but gave us a nice cool-off. The air temperature was in the 40s, perfect for running!

We continued on towards the climber’s camp; the further we got away from Lena Lake, the worse the trail became for actual running. Around the 6 mile mark from the start, there was a large blow-down area that reduced us to a complete crawl.

Past the blow-down, we were occasionally able to pick back up the pace to a run-walk, but the trail began to turn more into roots than foot path. Near the climber’s trail, snow began, around 3,000′.

Snow was consistent near the river crossing at the climber’s trail, which is marked in the picture above. Around 0.3 miles above the river, the snow gave way to trail again, until we reached a large open burn.

The burn was thick with alders and blow-downs; we chose the path of least resistance, rather than trying to stick to the “trail”, which seemed an arbitrary string of connect-the-dots between downed flagging tape markings.

Once through the burn, the snow began in full, continuing continuously until the summit ridge. The snow was rotten towards the bottom of the apron extending beneath the peak; at times it became more solid. Tyler and I alternated initially in kicking steps.

Our paced slowed significantly once we hit the snow; we were glad to have brought along our microspikes and ice axes, as our trail running shoes were very poor at cutting steps. The snow was firm enough in some parts to slip and slide.

We reached the top in just over 5 hours; we spent just a few minutes atop, as the wind and clouds rolling in made it too cold to enjoy. A high five, a quick snack, and down we went. We plunge stepped our way down the snow, postholing up to our knees most of the time.

Descending back down the burn was just as much of a bush-bash as the way up. Once back across the river, we regained our slow trot until we cleared the blow-down, at which point we picked the pace back up to a slow jog. We felt good, but the trail underfoot was still hard to pick up significant momentum.

Once back at Lena Lake, we began the quick run down to the car. I felt so dynamic gliding along the well-tracked trail now, feeling as if I was gliding (I’m sure it was MUCH less elegant than it felt).

We were back at the car before 4 PM, happy to return home for dinner and a shower. Overall, a great day in the mountains.

Begin typing your search above and press return to search. Press Esc to cancel.