When you ask an experienced New Zealand “tramper” about the Dusky Track, you are likely to be met with a chuckle. This chuckle is all that is needed to describe what is known as the “Dusky,” a treacherous, remote route through New Zealand’s Fiordland National Park.

It begins! Today we got our feet wet out on the Dusky Track, both literally and figuratively.

I woke early to catch the NZ sunrise over the valley of Manapouri, which was a good start to the day. The sun gave a glow to the valley that will remain memorable.

Out to the Dusky we headed, meeting a shuttle which ferried us to Lake Haruoko.

The ride across the lake caught my attention, as we passed over the deepest lake in NZ. We were dropped off by the ferryman at Haruoko Burn Hut and away we went along the Dusky Track!

Even the early miles were filled with mud and wet feet. The trails here in New Zealand are much more shear and rugged than in the states, and do not seem to allow for fast pace. We crossed two three wire bridges, and had numerous deep trudges through the mud during the day.

Sandflies gave us a greeting upon our arrival at Halfway Hut, nagging us just enough. On to Lake Roe tomorrow.

Woke up to a nice quiet hut before the others. We tied up our boots and rushed for a picture with the hut, as sandflies picked away at our now swollen flesh.

Finally, above the bush! I made my way through thick jungle and copious muck, but now I get to the good stuff. I emerged from jungly into low tundra like marsh, and eventually made my way up to Lake Laffy and Furkert Pass, which gave sweeping views of the lower lying valleys below.

The dramatic peaks are covered in low moss, which leaves a truly remarkable scenery. I am at home here up in the mountains, a reminder of where I truly belong. Taking a deep breath of mountain air, I am fully refreshed.

Whew! Up to Tamatea is work, but damn is it worth it! I felt like a true alpinist making my way up, through the rocky scrambles and exposed ridges. This kind of travel is what it’s all about!

The final push to the top was loads of fun, as we scrambled up some Class 3 terrain. Tamatea was my playground, and I was back to being a child again.

As we took the summit we let out loud yells, rejoicing in our success. YEAH! We were treated by sweeping panoramic landscapes of NZ’s alpine peaks, which was a special treat after days in the lush bush.

We had a little fun while on top, posing for may photos. Taking in the moment, we headed down to Lake Roe Hut, slipping and sliding through the now wet low tundra (I even snapped a pole. . . oops).

My shepherd’s pie dinner tasted like pure heaven, and I devoured the entire large portion with ease.

It’s Christmas! I was up early before the rest of the hut, leaving some peace and quiet to myself. With the raindrops beating down on the roof, it was a very cozy feeling as I ate my oatmeal and read from the hut book.

My feet are beginning to show some wear and tear from the hike, with a few blisters/rubbing spots showing on my right foot. Unlike others in the group, I am embracing the discomfort as part of the experience. After all, aren’t bruises, blisters, and smell what backpacking is all about??

The pace of today has been perfect, taking our time to enjoy the alpine of NZ. Today began cloudy and rainy, yet began to clear in the later morning hours. The remaining clouds provided a drama to the scenery that captured my attention, crowning peaks in a blanket of white. 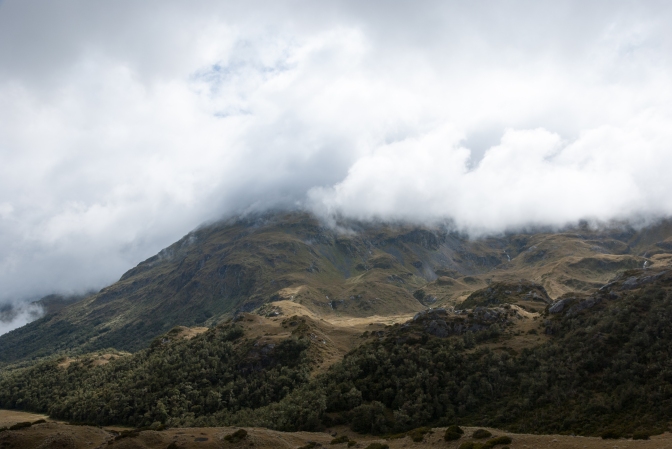 We took lunch by Lake Horizon, beneath a perch which sheltered us from the wind (for a while). I lay back in some tall grasses and munched on my meal while I took in a deep breath and enjoyed the surroundings.

Down to Loch Maree Hut

Man, are my knees crying! Down, down, down we went after our time up above the bush as we made our way towards Loch Maree Hut.

We got amazing scenes of Dusky Sound on our way down, looking out over the west coast towards the ocean. We savored the views, as we knew we were soon leaving our high perch.

I began to feel the effects of the sun after we made it below the bush line, my hands and face showing significant cooking.

Our descent began, and it didn’t stop. Apparently typical of NZ terrain, our descent was more of a down climb than a hike, with multiple, if not countless, places where scrambling was necessary.

There was one section where we used chains to drop down, and I got plenty of awesome action photos of the group making their way down.

My knees were crying towards the end of our descent, feeling more like concrete than shock absorbers. I was very happy to see the Seaforth River, which was a signal of our finale.

As we approached the crossing the water rose up to my mid-thighs. I walked up to the walkwire as the rest of the group waited below.The walkwire was slick from the rain, and took me a considerable time to navigate. I watched my feet closely as I saw the river pass below.

After making my way across I headed straight for the hut, seeking refuge from the sandflies. I heard later that the rest of the group saw an eel swimming in the waters around them.

Arriving at the hut, I immediately shed my wet clothes and began boiling water for a meal, rewarding myself after a long day.

I woke early to catch the sunrise, trying to take advantage of my time in NZ. My initial alarm at 5 AM was a rough one, and it took me two minutes to convince myself to at least poke outside. Once I was able to move around, I was glad of my decision, as the early morning clouds provided a dramatic backdrop to the day’s beginning.

The rest of the group woke as the morning went on, and we headed out into the trickling rain. Walking around Loch Maree was steep, much more than just a traverse. The morning drizzle continued on and off, confusing us even when we thought the sun was shining.

The day began to change when one of our team members took a fall on one of the infamous three-wire bridges, injuring herself significantly. Immediately, our team sprang into action, administering medical attention and beginning to develop a rescue plan. Out came the satellite phone and the Garmin inReach.

Amazingly, our injured teammate was able to walk herself to our next hut, a true testament to their strength. As the night fell, a helicopter landed on the beach outside, whisking them away to a hospital for treatment. The rest of us remained at the hut, tired, exhausted, and emotionally drained, and prepared to take a rest day to recover from the incident.

Building back our momentum was difficult, with the traumatic experience of what had occurred the day before. We all were a bit shaken, unclear what the “right” thing to do would be. Was the trip the same without our injured teammate? Should we try to hike out as fast as possible to meet back up with them?

We took the morning slowly, debriefing about the events over breakfast, highlighting some of the decisions made during the rescue that resulted in our teammate’s evacuation to safety. We built back up our momentum over the course of the day, spending time on the beach taking in the sun, trying our hand at fishing in Dusky Sound, and taking in the night sky as the day came to a close.

Back to Loch Maree

I had initially planned on waking up to see the stars at 3 AM, but decided to sleep more. I woke from our rest day ready to tackle the trail again, determined to regain the strength and confidence we had before the incident.

My feet were delighted to be in dry shoes again, as I had let them air out over the course of the rest day. That did not last long, though, as within minutes of getting back on the Dusky I was yet again soaked in mud.

At one of our lunch breaks I took a moment to inspect my legs, noticing they were overcome by sandfly bites. Typical.

Everyone is beginning to show a fair amount of wear and tear at this point, with bumps, bruises, and plenty of sandfly bites to show as evidence of the Dusky.

The day began with small ups and downs, with a long climb up to Geir Loch towards Center Pass. Hiking down low, below the bush line, was starting to get old for me, so it was nice to get back into the alpine.

The last 1 km to the hut was very much like a crawl, my brief nap by the Loch not helping very much. I bumped my way home, twisting my ankle and trudging through the mud. My feet at this point are eaten alive, the sandflies having a good snack with them.

It’s crazy to think that the end is nearing 8 days into our muddy adventure. We have become quite efficient at our operation, with plenty of practice at this point.

Done with the Dusky! Rain battered us all night long and into the morning, but that didn’t manage to stop us on our way out from the mud of Fiordland! We trudged through some decently deep water and thick mud throughout the day, full from the plentiful rainfall.

We made it back to Te Anau, enjoying the fruits of our adventure!

Sam is an accomplished backpacker and mountaineer, as well as a current Mechanical Engineering student at the Georgia Institute of Technology in Atlanta, GA. After his freshman year in school, Sam thru-hiked the John Muir trail (in 2017) in record, early-season snowpack with his father. Sam went on to lead a school-sponsored expedition to Alaska and New Zealand over the next year before his next big adventure: climbing Kilimanjaro (19,341′), the tallest peak in Africa. The summer after sophomore year, Sam set out on his first solo adventure, a 40-day cross-country jaunt across Colorado through the San Juan, Weminuche, Sawatch, and Rocky Mountain National Park areas of Colorado. That same summer, Sam went on to lead another school-sponsored expedition to Alaska and then to Corsica, France, to hike the infamous GR20 trail. During his Junior year in school, Sam stayed busy adventuring, climbing Iztaccihuatl (17,159′) and Pico de Orizaba (18,491′) during long weekends off from classes. Sam’s next big adventure was down to South America for mountaineering in Ecuador with friends, as they climbed Cotopaxi (19,347′). When on campus, Sam is a trip and expedition leader, as well as the student president, for Outdoor Recreation Georgia Tech, one of the nation’s largest college outdoor recreation programs. View all posts by engineeredforadventure